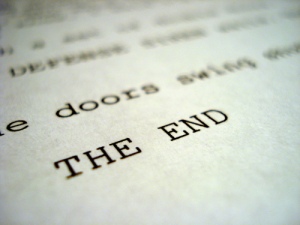 What do you do when “okay” is good enough?
By Elizabeth Cutright
© 2012 The Daily Creative Writer

As a once aspiring screenwriter, I full enjoyed Stephen Harrigan’s fun piece in today’s Slate detailing the highs and lows of a mediocre career as a Movie-of-the-Week screenwriter. In his confessional essay “I Was an A-List Writer of B-list Productions”, Harrigan paints a funny/tragic picture of the writer with aspirations that far exceed the realities of his career.

“I never thought of myself as a TV-movie hack. I wrote with the anguish and conviction of an uncompromising indie auteur,” admits Harrigan before he goes on to declare, “I was an A-list writer of B-list productions.”

Once of the most startling realizations that hit me during my time as a film student was the amount of work – creative and physical – that goes into the creation of a film. Good or bad, success or failure, nobody ever starts out trying to make a flop. Every movie begins as an act of faith – a hope that this creation will take wings and fly.

And even though many projects fail to leave the landing strip, there are many more that take off, only to hover a few feet above the ground – grabbing just enough altitude to glimpse the clouds without ever coming close to the stratosphere.

Okay…I’ve taken that metaphor about as far as it can go…you get my point: we can strive and struggle and push ourselves to eek out just some tiny fraction of what we want to express, and still our final project may never rise about mediocrity.

And if we’re aiming to write in a bubble – free of feedback or expectation – then is the act enough? Is mediocrity just another word for getting it right enough to make a living, see it published, get a byline?

For example, even when Harrigan realized his contribution to the process “was crucial but not definitive, that an unproduced screenplay, no matter how brilliant I thought it was, was just an evolutionary dead end,” he understood that there was “real pleasure in the work itself, in setting down dialogue and screen directions against that blessed field of white space, in endlessly wrestling with plot and structure, in discussing the next draft with producers and executives, who with a few exceptions were not brain-dead Hollywood sharks but thoughtful and intelligent people.”

What does satisfaction ultimately look like? Writing is a peculiar pastime. We write from inside our heads, but the very act of writing is a form of communication that begs an audience – even if it’s a spouse, loyal friend or weary colleague. After all, Harrigan’s work was hitting an audience; sizeable audiences at that, as his successful scripts – Beyond the Prairie: the True Story of Laura Ingalls Wilder and The Last of His Tribe – were made into movies seen by millions of television viewers. Even his least artistic work – The OJ Simpson Story – was considered a ratings success even as critics universally reviled it: Harrigan describes the television movie a “point-blank-target of critical fusillade.”

Nevertheless, Harrigan acknowledges his dreams of accomplishment, his writerly victories, were never tied to the paycheck or the ratings – or even the final transformation from page to screen.

“I satisfied myself with a middling successful career because the work kept coming without me having to go in pursuit of it,” he confesses, “ and also because I was wary of that pursuit when I knew it might lead me permanently away from the sort of writing that mattered most to me, novels that I could hold in my hand, that had no budget restraints, and in which my own voice spoke for itself.”

It takes a lot of courage to turn your back on the mildly satisfying, on the “almost right” career or situation. When I was in law school and feeling dissatisfied by my choice, I always took pains to remind myself that there was a time women were not allowed to study the law, that just a decade before my attendance female lawyers were still struggling for legitimacy. And so I powered through. Nowadays, with the wolf named recession howling at my door and the magazine industry gasping for breath, I remind myself that there are many folks out there doing time in airless cubicles (mine’s not all that fancy either, by the way) or sweating behind counters dreaming of a career in “publishing.” And so I power through, looking for ways to improve my craft and learn new techniques or insights within the confines of my current professional fish tank.

Even though Harrigan no longer aspires to a career in screenwriting, some of the observations he makes about writing for television work as healthy advice to writers mired in style over substance:

Finally, Harrigan learned, “You had to search and search until you found a story’s irreducible thread: a man on the run from a killer, a young girl growing into a woman, a victim seeking revenge. If a movie was about one thing, it could be about many things. But if you started out determined to make it about many things, it be about nothing.”

So if you’re aspiring to something greater, if your stuck in an in-between place that sometimes makes you feel trapped and unable to breath, try tp blossom where you’re planted. Use your current circumstances to enhance your skills and practice different styles. Try on different writer hats and lifestyles; perhaps you’ll be surprised at what feels like a good fit.

And remember, the most important ability to cultivate is a sense of hope and enthusiasm.

“I was 58 years old, probably almost twice the age of the executives I would be meeting,” writes Harrigan as he describes his last meeting with a pair of Hollywood producers. “I had been doing this forever, but I was still an outsider, still an outlander. At my age the odds were growing slimmer and slimmer that I would ever write the next Lawrence of Arabia, but that didn’t matter to me. I was content with my hard-won place on the B Team of American culture, happy to be sitting in a booth in Bob’s Big Boy psyching myself up for a meeting that after all this time still seemed to hold the promise of a dazzling new career in the movies.”

Here’s to the dazzling career that’s just waiting around the corner!

2 thoughts on “Successful Screenplays and the Art of Mediocrity”