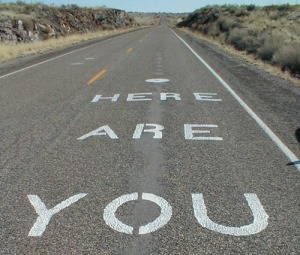 Where are you?
By Elizabeth Cutright
© 2012 The Daily Creative Writer

Whenever my friends and I lose each other in a crowd or a super store, on of us will yell out “Marco” and wait for the answering “Polo!”  It’s goofy, but it never fail to make me smile.  It’s also reassuring – we’re checking in and establishing our position relative to each other.

Great writing can also help the reader check in and determine their position in relation to the world.  For the writer, sometimes the best place to start is by determining where are.

“For me a sense of place is central to good writing,” explains Julia Cameron in The Right to Write. “Place is the most pivotal fact of connection.”

When it’s done well, establishing a setting can transport the reader.  Years later, I can still conjure up images of places I’ve never been – some of which don’t even exist in the “real world” – but have been wholly inhabited by the characters in my favorite novels. 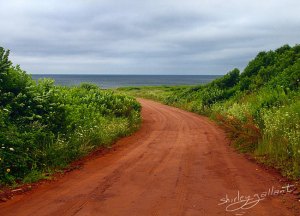 I can see the red clay roads of Avonlea, feel the wind sweeping across the moors, see the heat rising up off the desert sands of north Africa.  If you ask me, I can lead you on a tour of Hogwarts Castle, point the way to Netherfield park, and explain why right now it would be a really bad idea to travel from Kings Landing to Winterfell.

Stately castles, charming country roads, nooks and crannies of mystery and the mundane – all these places set the story and create a context for the characters actions and motivations.

“When we place a piece of writing carefully and specifically…we create a context for what we are saying,” explains Cameron.

Writing exercise: List all the places you’ve lived, then pick on and describe it detail by detail

The House on Cass Street

I’m around 10 years old, and we’ve moved into Vera’s guest apartment on the second floor of her house on Cass Street.  We’ve elected to move in next door to our 10-unit motel while the site’s garden is razed and replaced by our new home – a ranch style abode we will ever after refer to as “The Seastrand House.”

Vera’s guest quarters are comprised of two whitewashed bedrooms with beige carpeting, separated by a staircase that leads to a small bathroom.  The room I am staying in is tiny, with gleaming walls and a small, west-facing window that I have to stand on tiptoe to see out of, but that reliably disperses a sent of sea and garden flowers on the afternoon breeze.

All along the walls of the room are stacks of old magazines – National Geographic… Life…Readers Digest.  When I’m bored, I grab one at random and leaf through the stiff pages.  In this way I learn about the great Anchorage earthquake and the Mai Lai massacre. I develop an uncanny affection for the silly,corny jokes tucked away in “Life as We Know It.”

There’s an “old lady” smell to the place, which is predictable since it’s owned by an old lady – Vera is kind and doddering with just the right amount of nearsightedness and white hair to make her pop out like a character in a novel.  When the windows are closed, rooms become stifling in the summer heat – sealed tight against the corroding sea spray crawling up from the beach that’s less than a block away – so close I can hear the breakers at night. Sometimes the lone clang of the buoy fills me with dread…a slow, long, bleak moan, repetitive and headless in the midnight fog. 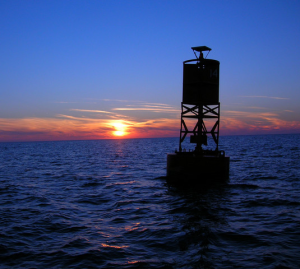