“Life is not a submarine. There are no plans.” Anne Lamott, Bird by Bird

So you’ve got a story to tell.  That’s great news!  You’re halfway there.  But perhaps you just have an inkling of what you want to say, the tale you want to spin.  Maybe you just have one element – where it all takes place, the moment one character sees the truth, the MacGuffin everyone is searching for.  How do you building a story out of one element, one ingredient? 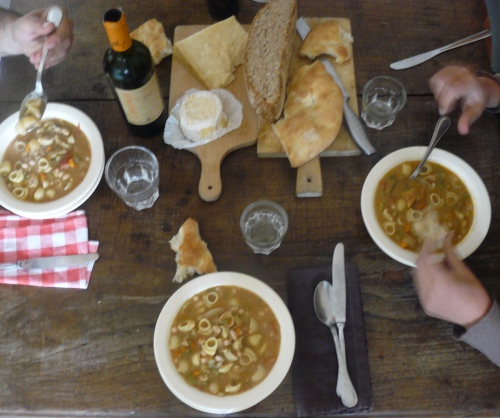 The answer is, step by step.  Just like soup, a great story simmers, expands its flavor profile, changes grows and transforms into a meal with a sprinkle of salt here, a handful of rosemary there, a cup of broth, a cutting board full of vegetables: it all adds up to something great, something you might not have even anticipated when you first started.

The making of that soup is the plot.  What did you have when you started?  Did you have a can of broth in the cupboard, or did you make it by hand, distilling shades of flavor through a slow boil over the better part of an afternoon?  Perhaps you saw a package of dried beans and an onion in your fridge and you thought, with some fresh herbs and a bit of frozen chicken, I could be on to something!  Maybe you had a plan from the start – a robust chili, a delicate puree, a creamy side dish – but once it all got in the pot, the reaction between the elements created something different, something better (or worse) than you had anticipated.

Writing and cooking have a lot in common.  Other than some very precise recipes (a Crème brûlée, eggs Florentine, anything French), the best meals  – and the best stories – are often crafted out of spontaneous additions and a vague sense of destination.

At least, that’s the way I cook.

My writing reflects my enjoyment in the improvisation, in starting off in a direction without a final destination because you know somewhere along the way a great adventure is waiting.  Don’t get me wrong – I’m a planner, I make sure to have a recipe handy and I try to keep some basics in the cupboards at all time – but I still love the challenge of cooking up something great from a larder full of disparate ingredients.  And I love the challenge of finding a way to tell a story through bits and pieces, through odd characters and unexpected moments.

For many of us, the character is king.  It’s why we read and why we write.  Some characters we meet early and revisit often become a part of our history, like a long lost relative or pen pal that we never met but who amused and educated us through words, and actions, and ideas.  And whether we realize it or not, our own lives are often stocked to the brim full of characters – the bag lady at the bus stop, the cheery barista with the lilting accent, the guy who climbed up a tree to talk on his cell phone (seriously, I literally walked under him two days ago on a hike!  Why he was up there, I’ll never know…but I can imagine…)

“Plot grows out of character,” says Anne Lamott in Bird By Bird. “If you focus on who the people in your story are, if you sit and write about two people you know and are getting to know better day by day, something is bound to happen.”

You’ll know you have a good character if you find that your creation is chomping at the bit, antsy to get to the action, to participate in the events and interactions waiting on the other side of the plot.  That’s the drama, the tension, the reason your story exists.

“Drama is the way of holding the reader’s attention,” explains Lamott. “The basic formula for drama is setup, buildup, payoff – just like a joke.  The set up tells us what the game is.  The buildup is where you put in all the moves, the forward motion, where you get all the meat off the turkey.  The payoff answers the question, Why are we here anyway?”

Don’t know where to begin, then here’s a recipe I’ve tried with some success…

The Short Story Formula (by Alice Adams via Anne Lamotte)

Good luck in the kitchen – I can wait to see what you’ve cooked up!

One thought on “Cooking up plots and turning half-baked notions into a story.”